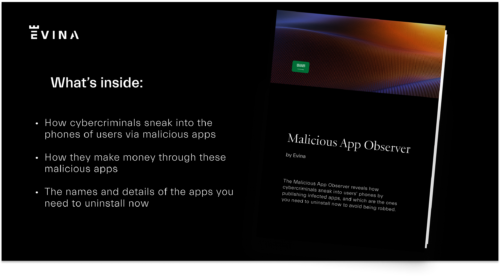 “Malware that infects users’ phones remains a quiet scourge in many of the mobile ecosystem’s app stores ” says David Lotfi, CEO of Evina.

Evina is a leading cybersecurity solutions firm that protects more than 20 million transactions per day from being compromised by malicious apps. In an effort to protect users and businesses worldwide, the company will now regularly release detailed reports on the most malicious apps across more than 80 countries where it has a fraud-preventing presence.

“Malware that infects users’ phones remains a quiet scourge in many of the mobile ecosystem’s app stores,” says David Lotfi, CEO of Evina.

Mobile application stores have partially acknowledged the problem of cybercriminals publishing infected apps that attempt to defraud users. Google alone announced in April that it had removed a million potentially malicious apps from its Play Store.

Evina, however, which has a long track record of helping mobile network operators (MNOs) and others develop their mobile payments strategies, explains that app store owners underestimate the magnitude of the presence of malware because they can’t accurately identify all the malicious apps on their platforms.

In this context, the results of its regular mobile app store monitoring will be collated in Evina’s ‘Malicious App Observer’ that reveals how cybercriminals publish infected apps and which ones should be avoided.

“The fight against malicious apps is first and foremost a matter of technology. The biggest players need to make sure, with the help of solutions like Evina’s, that they do not subject their users to dangerous applications. For this to happen, end users and ecosystem players need to be more aware of the dangers posed by these apps. Our reports aim at helping raise this awareness,” Mr. Lotfi says.

Evina has helped many of its responsible and forward-thinking partners including Ooredoo, Proximus, Orange and Vodacom to protect their mobile users. Yet, in an ecosystem as complex as the mobile cybersecurity market, each player needs to implement appropriate cyber protection, as it sometimes only takes one weak link for cybercriminals to bypass protections and steal money.

The Evina Malicious App Observer will focus on a different country in each edition and explain how fraudulent apps end up in mobile application stores, why, and how to stay alert and safe.

Thanks to its proprietary technology developed over 15 years, and its information-sharing partnerships with telcos, Evina is able to identify fraudulent apps better and faster than anyone else.

The sheer size and potential value of mobile application stores make them a very attractive target for the world’s cybercriminals.

Apps injected with malicious code are furthermore difficult to detect with conventional security techniques because they are only launched on users’ phones under certain conditions.